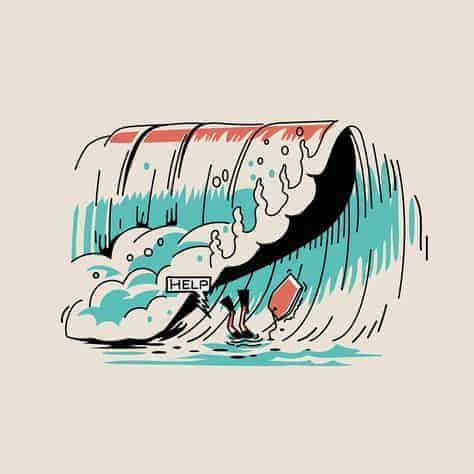 Sharing the list of the best kook slams for 2020 and breaking it all down so you don't repeat the same mistakes here.

With surfing constantly growing in popularity, there seem to be more and more kooks hitting the water these days. Don't let this annoy you too much though, as they can be the source of some great entertainment!

We’ve all been there too, and taking some heavy beatings will always be a major part of surfing. Not only is it the fastest way to learn, but big wipeouts are how you earn your chops out in the waves. Ok, we may not all have had wipeouts like some of the guys in the clips below, but I'm sure they all came out better off after experiencing them!

What is a Kook?

Before we move on to some of the finest real-life examples, let's take a look at what being a kook actually means.

Everyone who learns how to surf has seen a few bad wipeouts – it’s just part of the sport. No matter how many times you may fall off your board though, it doesn't necessarily make you a kook.

A kook is the kind of person that causes their own problems. They will surf in spots that are too far beyond their skill level - all the while over-exaggerating how good they are. Kooks try to make out as though they are more advanced than they really are. Just make good judgment calls and understand your surroundings.

There's a big difference between a beginner surfer and a kook - something that you will discover in the clips below.

Surfing Etiquette - Avoid Being a Kook

It really doesn't take that much to avoid being a kook, and looking like a chump in the water! This connects to basic surf etiquette - knowing your skill level and experience.

Don't paddle out if you can't handle the conditions. Be honest with yourself, and stick to a spot that works for you. This will not only keep the other surfers out in the lineup from being annoyed, but it will lead you to have a whole lot more fun!

Follow all other basic rules of surfing too. These include:

Or talk the talk and be a kook. Just take a look below at what might happen to you...

Here are a few carefully selected clips of the best kooks slams of 2020, as well as some advice on how to avoid being one of these unlucky superstars. Take notes here, as you don't want to be the next to feature!

Want to see what happens when you overestimate yourself? Here are some of the best kooks that made it to Instagram.

Where was this guy planning on going in the first place? Was he trying to slip under the wave, or catch it? These are questions that we just can't answer.

From the placement of his board to the rate at which he tried to turn around - there is just so much to ask. Let’s not even mention how this wave is breaking right onto the sand. This is why we all need to learn how to duck dive (as well as lie properly on top of our surfboards).

This one was trouble straight from the start, and we think that cameraman knew it too. Notice how there's nobody else out trying to catch this wave? This probably should have been a sign from the beginning. If nobody else thinks it's a good idea to hit the waves (or the sand in this case), then maybe you shouldn't either.

Getting into the water is sometimes the hardest part - especially if you aren't checking your leash! Please notice what this guy’s vest says - because even your experienced “instructor” can end up being the kook of the day. Take notice of the small details before taking your leap of faith into surfing.

A post shared by Kook of the Day (@kookoftheday)

What you will learn in surfing 101 - never drop in! If you would like your session to resemble more surfing and less kung fu, then this is a good rule to follow. Dropping in just never works out - for both parties involved.

This one was going swell… we guess it’s always a good idea to pay attention to where you are heading. In this case - straight to the beach! This definitely wasn't a slow wave either. We’re sure this acrobatic bodyboarder was still finding sand in places days after this session.

Also, please take note of the other keen surfers that were ready to drop into that wave.

Party wave! Ok, wait, what’s going on here? Who dropped in on who? We still can't figure out which surfer thought they would really get a good ride out of this wave.

Lineups these days may be getting a little crowded, but this one takes the cake! This video’s titled “The gift that keeps on giving”, and we think that's about as accurate as it gets.

And she was nearly safely out of the water! We guess you can be a kook even when you're not trying to actually catch any waves. Sometimes, acting all cool and casual can backfire. Top tip: always keep an eye on your board.

Ok, so this one may not involve surfing, but this is certainly a top-quality kook slam none the less. Ouch.

There's nothing wrong with taking a beating while you're out in the water, but sometimes it's just embarrassing. If you want to avoid swinging from rocks, catching any serious unwanted airs, or spending a little bit too much time on the beach, then maybe it’s time to sharpen up your surfing foundations.

Always remember to follow basic surf etiquette, as well as common sense. We aren’t all absolute surf gods (and we don't expect anyone to be), buts let’s just try our best to avoid being total kooks!